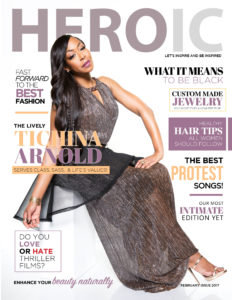 Heroic Magazine is a quarterly lifestyle publication, aimed to UPLIFT, MOTIVATE and INSPIRE. Heroic is published online and also has a limited print edition. Launched in 2015, Heroic’s mission is to tell stories of everyday people who are making a difference in the world.

Heroic Magazine publishes exclusive editorials, news, and interviews on pop culture, lifestyle, motivational speakers, romance, and more. Bringing you the latest and the greatest in the world of Heroic, our magazine delivers insightful stories complemented by our unique layout and design. We aren’t your typical magazine.

Heroic is setting the tone for future magazines. Attracting thousands of readers per month, Heroic has a 56% readership of men and 44% readership of women. Of our readers, 48% are between the ages of 18-24 years old, 32% are ages 25-34 and 20% are 13-17 years old. Heroic is read across the world, but is primarily read in the USA, Canada, UK, Italy, Germany and Africa.

Heroic also writes and produces original music for artists. We also produce music videos and film and photography. We are gearing up for the release of our new web series, which will be an interactive way for us to talk to various individuals around the world.

Have a story or idea you’d like to pitch? Email us: [email protected]

For Advertising, PR, Songwriting, Production, and other inquiries: [email protected]